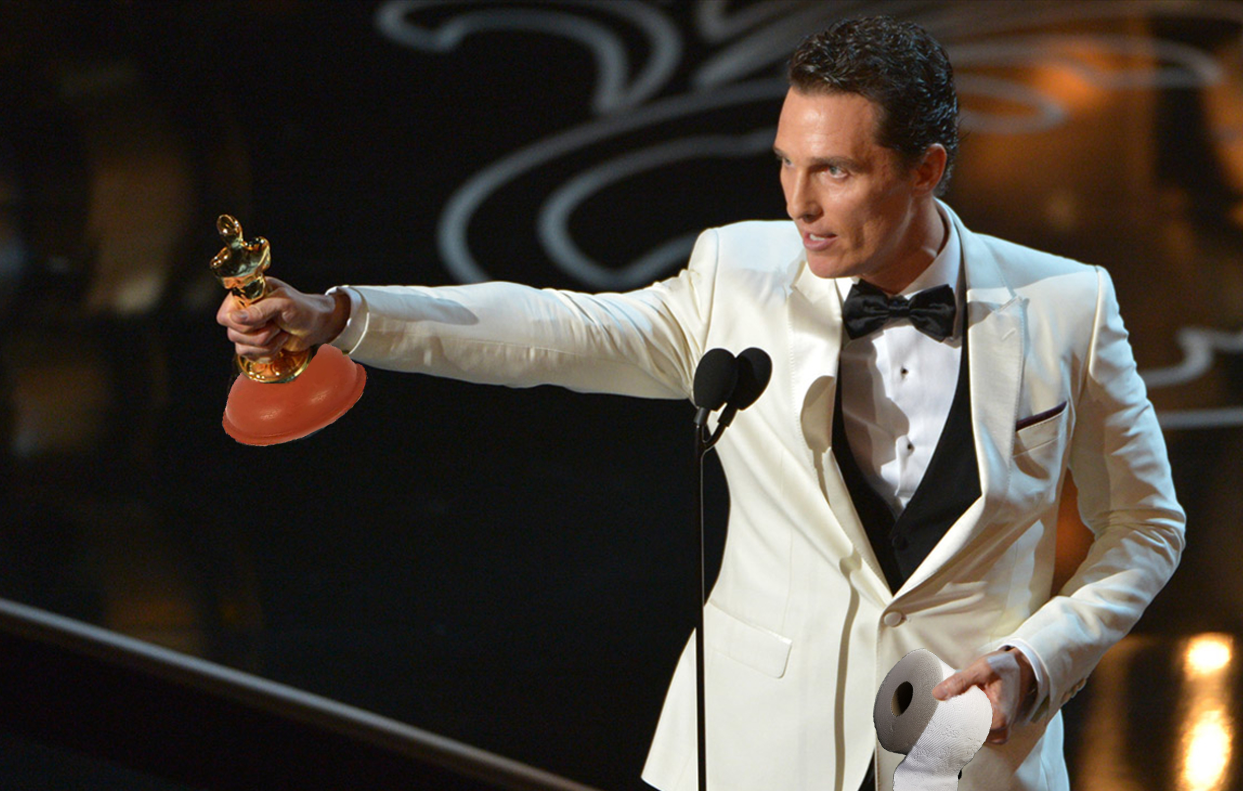 NEW YORK — Researchers at New York University Department of Cinema Studies have found that 95% of Best Supporting Actor Academy Award winners will at some point use their oscar as an emergency means of unclogging their toilet, unsurprised sources reported.

“I didn’t realize until after I flushed that my toilet was more overfilled than the plot of The Dark Knight Rises. There was no plunger in sight, so I grabbed the closest thing to me, which just so happened to be my Best Supporting Actor Oscar for The Cider House Rules,” said two-time best actor winner Michael Cane. “When I first put it in the bathroom it was purely for decoration. I never in a million years expected it to come in so handy. The only thing I’m embarrassed about is the fact that I hadn’t thought of it sooner.”

Supporting Actor winners interviewed for the study noted that the award’s ergonomic shape makes it an ideal substitute for a plunger when one isn’t available.

“I haven’t needed a plunger since I won my People’s Choice Award for Ocean’s Thirteen back in 2008. It was starting to wear out, but thankfully I won Best Supporting Actor for Once Upon a Time... in Hollywood before I needed to replace it. Saved me a good $15 bucks,” said celebrity actor and frequent toilet clogger Brad Pitt. “I actually broke that Oscar the same night I won it when I clogged Scorcese’s toilet at the after party. I’m normally not so easily impressed, but I also know quality when I see it. The statue part is such a comfortable grip, and the base is the perfect size for the toilet hole.”

The effectiveness of Best Supporting Actor Oscars as a replacement for plungers has led some plumbers to add them to their tool set.

“If I want to stay competitive, then that means I need to get all of my guys to add a best supporting actor statue to their plumbing gear. Trouble is that in order to do that, my entire staff and I need to win Best Supporting Actor. You can see why that might be a problem,” said Don Risotto, Owner of Risotto and Son’s Plumbing. “I told my son that if he wants to stay in the family business he’ll need to study acting at NYU for a few years and then work his way up through the film industry until he lands a role in an Academy Award-nominated film. It’s quite a few extra steps, but that Oscar really is the best piece of plumbing equipment I’ve ever handled, so it’ll be worth it.”

At press time, the Hollywood Foreign Press Association has asked former winners to stop burning Golden Globes for warmth to save on heating costs.